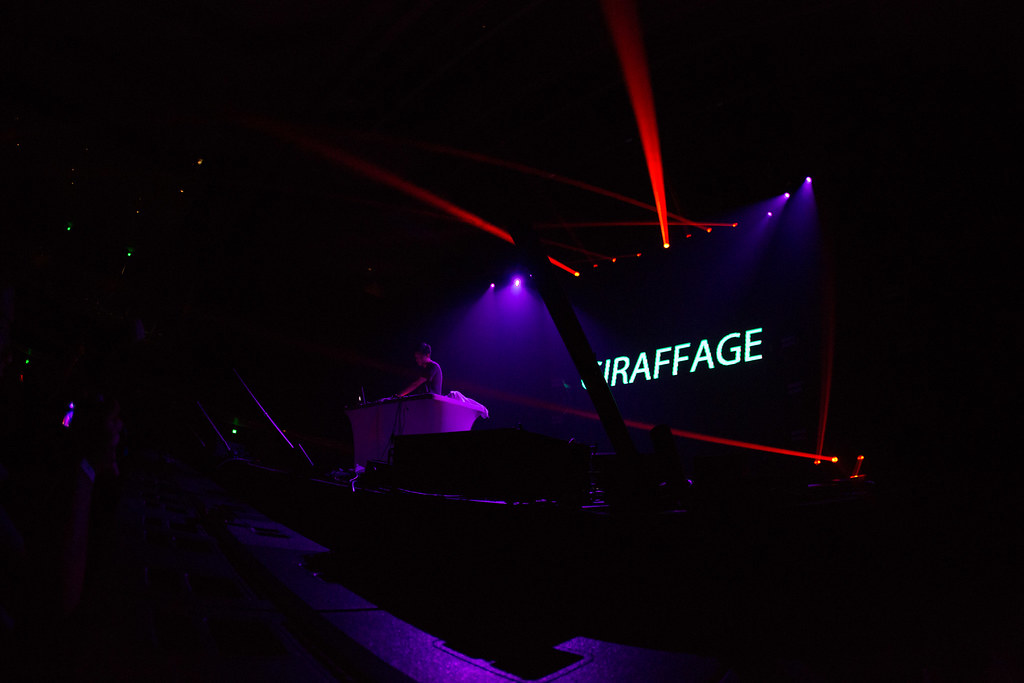 Photo by Steven Truong
By Anvita Akkur
Fellow Counterpoint editor Sanjana Desai and I stumbled into the blue haze of Le Belmont much too late for our liking. Worried that we had missed the opening act, Montreal’s own J.u.D, we hesitatingly made our way towards the front of the crowd. We were welcomed by a pulsating beat created by a man sporting a flower crown. As J.u.D. worked behind his Macbook , the crowd stood transfixed as waves of dreamy , almost cinematic, chillwave from his EP S†. Flower filled the dance floor. Just as soon as Sanjana and I got into a comfortable trance, J.u.D picked up his microphone and shouted the catchphrase of 2015 -BAKING SODA, I GOT BAKING SODA- followed by a kind of drop that sucked the air out of our lungs. The next half hour of his show showcased his remixes: pure, unadulterated trap with basslines that made our bones vibrate. The previously aloof crowd turned into a zoo. For the first time in my life, I did something I had never done sober. I danced – the kind of dancing that I only ever dared to do alone, behind the privacy of locked doors. I looked over at Sanjana, exhilarated, as she mouthed the words “this is out of control.” C’etait l’ostie d’experience J.u.D.

Next up in line was Pomo, an up and coming force in the Montreal music scene. A little out of breath from the J.u.D set and a little embarrassed from my public display of dancing, Pomo’s streamlined house was a welcome change. The crowd in the club bopped their heads to his J Dilla-esque funky synth. Pomo dropped tracks such as “Start Again” from his new EP, The Other Day, as well as crowd-pleasing remixes to create a feel-good atmosphere in the club. My personal favourite was his remix of Tinashe’s “Vulnerable,” an upbeat, deep-house groove. Pomo’s charismatic presence behind the stage drew great crowd participation and worked to create a positive momentum leading to Giraffage’s set.

The venue was full by the time Giraffage hit the stage. Typical of Montreal concerts, it was almost 2 am when Giraffage began his set. The fully-grown man behind me who screamed like a schoolgirl represented all of our emotions at that point. Giraffage’s futuristic, gentle vibes were a balm to our weary souls. The minimalism of his tracks such as “Tell Me” and “Close 2 Me” from his new EP No Reason, was contrasted by the bright and colourful visuals of corgis and cats projected on a screen behind him. Awash in a sea of purple and gold light, Giraffage exuded an aura of contentment that dissipated through the crowd. In between the set, he dropped a remix of Alice Deejay’s “Better Off Alone” that took me right back to my childhood.

Sanjana and I stumbled out of Le Belmont at 3 am, eyes bright and cheeks flushed, heads filled with innovative beats. As an electronica lover, nights like that were what drew me to Montreal.